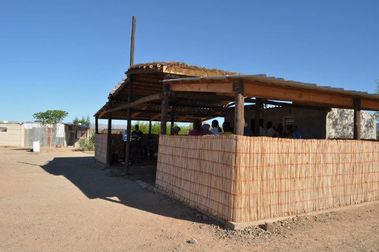 Over the last ten years, we have planted and discipled a church in the small village of Rooiwal on the banks of the Orange River in the Northern Cape. This is a poor community, a village of two to three hundred people living in extreme poverty and wholly dependent on seasonal work in the local farms.

We have, together with the Heideveld Baptist Church, helped to build a church building for the Christ followers to worship and learn at. We have been blessed with opportunities to help the local community with aid such as clothes and toys. We have also been able to contribute to, and help out with, installing air conditioning units in the local primary school. With the help of Linkway Baptist Church, we also were able to bring and build a jungle gym, along with other amenities, to the children in the area, and we continue to minister to the adults of the village during our visits.

Following the untimely death of the leader of the Rooiwal Church, Leonardo, in August 2013, Pastor Ben Smith, formerly of the Heideveld Baptist Church, has been called to become a missionary to the Richtersveld area, and lead the Church at Rooiwal, as well. Pastor Ben Smith has become a member of the Mowbray Baptist Church and has made much progress in the area and plans for new churches. Pastor Willem Agenbag has also garnered support from other Baptist Pastors and on the 11 March 2018, a formal "hand-over" ceremony to Pastor Willem was held.

1. Departed from Cape Town on 29 June 2014 at 23h00 and arrived in Springbok the following day when we proceeded to Kotzhoop or the area generally known as Rooiwal in the Richtersveld. I was accompanied by Pastor Derek Wentzel who is also an accomplished plumber and Brother Brinkhuis whose enthusiasm and zest for life belies his 80 years of age.

2. The greater part of the day was used sourcing building materials for the additional six metres square that needed to be added. With the added costs of delivering the materials we failed to obtain the roofing sheets but decided to continue as best we could. Our major challenge once again was to dig the holes to insert the poles that serve as both anchor and foundation of the structure. We manage to procure the following materials from various stores:

The preferred 4.7m roofing sheets proved to be too expensive and the option remained to procure it in Cape Town and deliver it to Rooiwal on the next occasion.

3. On arrival late Monday evening we had the opportunity to thank God for journey's mercies and the inevitable bible study and prayer meeting with some of the members of RBC. It also happened that some of the members of my unit are deployed in close proximity to Rooiwal and I had the added responsibility to accommodate the soldiers as well.

4.The morning of the 1st July2014 allowed us the opportunity to have our first Scripture Reading and prayer on parade as well as a well attended chaplaincy period directly after that. I availed myself to individuals that would want to have private personal conversation and had an overwhelming response.

5. Most time at church were spent digging the holes to have the poles aligned and planted in. This proved to be a most difficult task since our male compatriots needed to be at their places of work but we knew we are more than conquerors. Our second evening in Rooiwal found us with 80% of the poles planted with the intention it should set in cement overnight. To God be the glory because initially it seemed to be an impossible goal.

6. The evening allowed us to have a less structured form of conversing and most members came to share humourous incidents and have small talk. The progress we had made in planting and aligning the poles was scrutinised and everyone agreed that it was 'not too bad.'

7. The pattern of Tuesday was repeated for Wednesday with both the military and the building of the church. We had our usual evening service on Wednesday and it culminated in what can be termed a coffee bar. We had in depth discussions how most are feeling and adjusting to the absence of Leonardo and Martha and her family are showing remarkable resilience to overcome. However, the truth remain that Leonard's death had a devastating effect on the members in particular and community at large.

8. On Thursday Derek were tasked to ferry Martha and her family to Springbok to allow her to access her funds, pay accounts and buy food for the next month. It was the first opportunity that Martha and her three daughters had to shop together as a unit and they returned in high spirits. Erecting the cross beams and the highest one (5m) proved to be almost impossible for myself and Brother Brinkhuis but was completed upon the arrival and much needed assistance of Pastor Wentzel.

Identified Needs:
Bibles: Even though we have flooded Rooiwal and the Richtersveld with bibles in the not so recent past there always seems to be a shortage. As people accept and make a personal commitment to Christ, there always seem to be a need to present those individuals with their very own bible immediately. There is currently a need for Afrikaans, English and Kwangari bibles, in that sequence. Second hand bibles would be appreciated.

Creche: In spite of receiving permission to start with the crèche the R15-00 per child per day from government for which we qualify for only in 2015 effectively cripple the initiative. 20 Children have been identified and their parents are eager to pay a contribution of R10.00 per child per day, however they do need to be fed and enjoy effective oversight and teaching. The current contributions of parents translates to R250.00 per child per month which is hardly adequate just considering feeding them..

Building Materials. Any contribution in this regard will be highly appreciated as it is imperative to have a specific area designated for worship. The idea is to use shutter board and cladding for the outside and have a slated floor. Cement is one commodity that is constantly in demand. The showers and hand basins have not yet been installed for the little people and it need to be procured.

Stove and Kitchen area. It is envisaged that for the time being food be prepared over an open fire as we have not even begun to acquire a gas stove, sink and other amenities.

Clothes. We follow a system whereby clothes are distributed throughout the community and currently there does not seem to be an obvious need. I am contemplating taking the next batch of clothes to more remote settlements we have discovered in the Richtersveld park along the river about 20km away from Rooiwal. There seem to be a constant demand for kiddies clothes: babies to grade R and primary school ages.

Jungle Gym. A big thanks to Claremont Baptist Church and its members who have erected a jungle gym for the benefit of the children and some of the farmers have committed themselves to cover the area with shade cloth before the advent of summer. The area that would be covered is about 64m square and is nearing completion.

Trees. Mango trees seem to thrive in type of soil and climate at Rooiwal but need to be bought. The trees are being sold by local farmers for up to R40.00 for a young well developed specimens. Trees would be the one commodity that will assist Rooiwal becoming an oasis in the desert. The bonus of course would be in due time the trees will be providing fruit for the benefit of the children.

Travelling expenses. Ministering to the church in Rooiwal is an expensive exercise. On many occasions members are willing to give of their time and energy but lack the ability to contribute towards expenses. We have one bakkie that seats five individuals and can take some load with 410 000 km on the clock. On rare occasions are the missionary effort accompanied by another vehicle.

Conclusion. Despite the multitudes of challenges we know that the work must be completed and we go about it in the same way Nehemiah built the walls of the city. We revel in the knowledge that we have been chosen called and sent by the King. Our desire is to live in the knowledge of Christ and to make him known to the multitudes. Many has already come to the saving knowledge of Christ and more will come to know the King. We are encouraged when we read in 2 Thes 3:3 that 'the Lord is faithful, and he will strengthen and protect you from the evil one'.

When you consider your personal position in the light of the many needs mention I believe the one and most important contribution that can be made is to pray. Please pray for the Church and its needs in Rooiwal.

Unfortunately we returned to Cape Town ahead of schedule as Br. Brinkhuis' daughter was hospitalised and found herself in ICU for a prolonged period of time. We managed to have a meeting en route with the resident VGK Dominee in Steinkopft and he in turn expressed his desire for his members to at least worship at RBC in his absence. We would be having indepth discussions when we return to Rooiwal during the September / October school holiday period.